From their Vancouver studio, jewelry designers Wade Papin and Danielle Wilmore handcraft the heraldic talismans that have become the Pyrrha signature. “Jewelers traditionally try to make everything look perfect, say Danielle and Wade, “but we like to show the maker’s hand. We celebrate the original cracks in the antique wax seals." 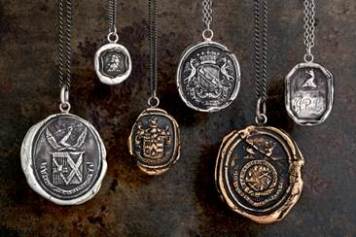 The pair designed the Pyrrha Talisman collection after discovering a dusty old box of badly damaged 19th century wax seals. “Designing jewelry from them was inspired by a desire to give the fragile waxes new life and permanence,” say Danielle and Wade. The handcrafted, thoughtful pieces are a striking contrast to the glut of overseas factory made, mass produced jewelry that is so common in their industry. Wade and Danielle explain, “everything seems to be cranked out at a staggering pace and then left for dead. Because we live in such a throwaway society, it’s necessary to create some things that can be kept."

Several wonderful Pyrrah pieces are available at www.shopatchurchill.com, or contact us for special orders.

by sally hilkene under Television
0 Comments

Comments have to be approved before they're published.